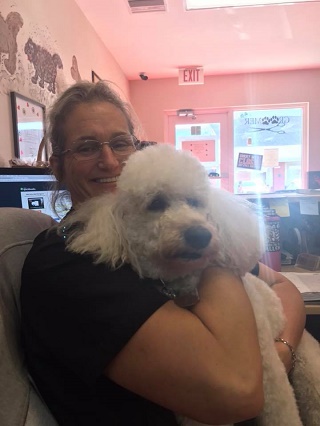 Maria started with dogs when she was 13 years old with a rescue she and her mom stole from a very abusive home where she had been abandoned.

Cricket was a big golden retriever mutt who Maria entered into 4-H with and ended up competing in many classes. Cricket even went to the State Fair and won some first-place ribbons. Most of her friends had purebreds so Maria learned some things about grooming.

Maria was raised on the coast of Oregon and was an avid equestrian. Her family raised Quarter Horses and when she was 16 she was showing all over Oregon and parts of Washington. She is the mother of 2 boys who were born in 1986 and 1989. As of this writing, both her sons still live in Oregon.

Maria has 2 associates degrees in computer science and was a network admin and office worker for many years. She got tired of the corporate life and moved into health and fitness when she lived in Jersey in 2006. She competed in bodybuilding and was a very successful personal trainer for 3 years.

She furthered her education in Florida and got her certification in Health Coaching and practices Whole Food Plant Based eating for her health and because she loves animals too much to actually eat them.

Tired of the cold and snow, she moved here to Fort Myers in 2010 and helped her father launch “YappyLand”. YappyLand was a high-end pet store with grooming. She assisted a highly trained groomer for a year, then when the other groomer moved on, Maria took over all the grooming. During that time and for 5 years she volunteered at the local animal shelter, working with dogs to pretty them up for adoption.

After 2 total hip replacements and hand surgery, it became too hard to handle the dogs at the shelter but continues to give discounted and free grooming’s for people who adopt “in need” pups at her shop after hours.

It’s been quite a journey; and with tons of patience, support from her family, and awesome clients, she has created TenderCare. Its mission is to create a new kind of grooming atmosphere where owners are welcome and rehab on special needs dogs is encouraged.

Maria would like everyone to know that as the owner of TenderCare, she is proud of her work with rescue and special needs clients and their owners. She has done everything in her power to make her shop the safest and most gentle, for these precious fur babies and their mom and dads. She participates in yearly continuing education and takes as many classes and talks to as many people as possible to stay current on trends and changes in such a fast-paced industry.

She looks forward to many years here in Fort Myers and will continue her efforts to educate and rehabilitate rescue dogs and owners. 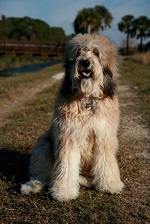 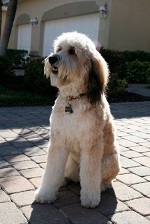